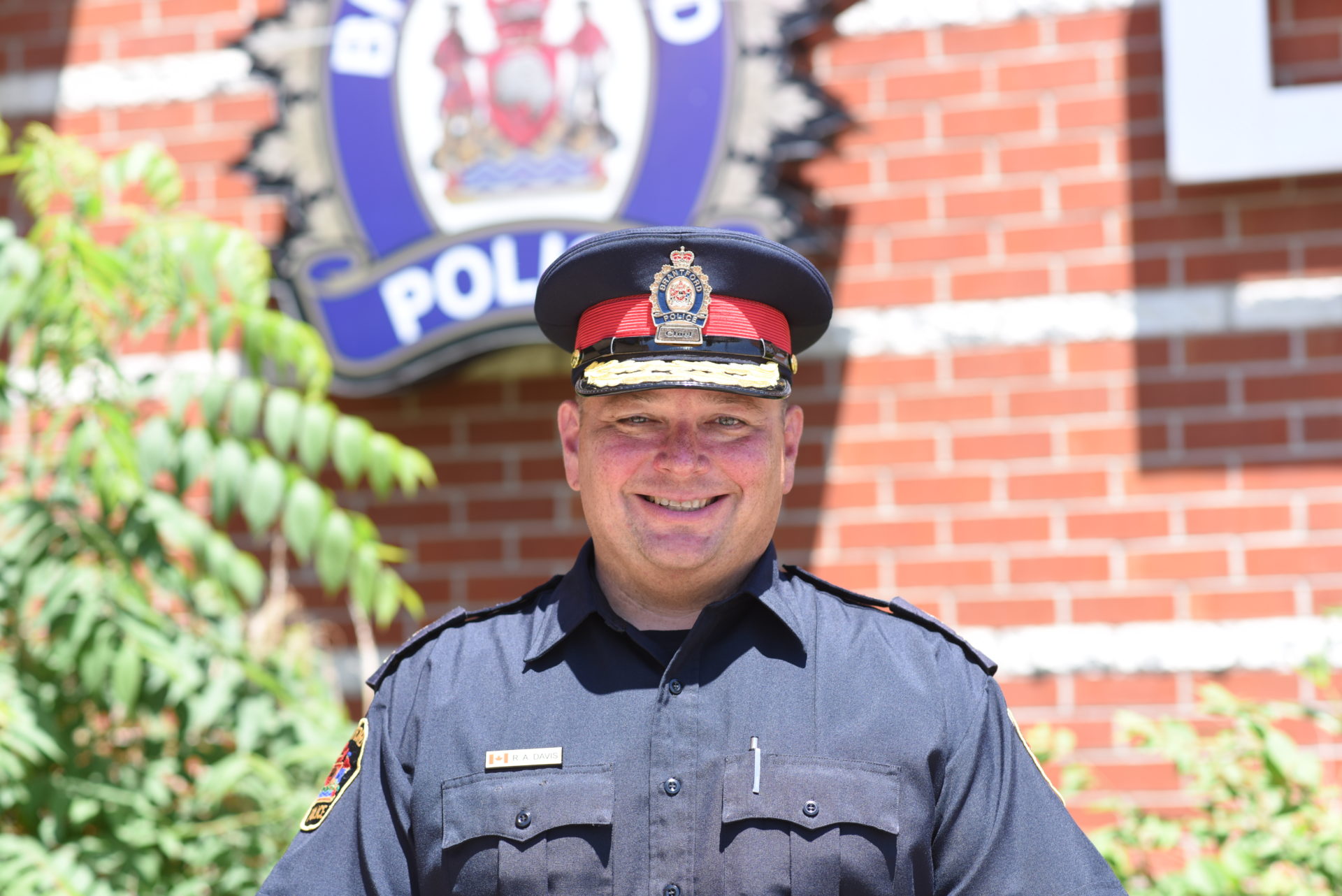 Quickly approaching his third anniversary with the Brantford Police Service (BPS), Chief Robert A. Davis is looking forward to using his past experiences to improve the way the service runs.

“I feel a little behind in my goals with the BPS,” he said. “The COVID-19 pandemic hit us four months after I took over as Chief. The priority changed and we’ve spent the last couple of years working to remain effective through all restrictions, while also keeping our team safe. As we come out of it, I’m excited to get to work on why they brought me in.”

Chief Davis joined BPS in November of 2019 after years of service in Ontario and Alberta, but did not originally dream of being a member of the police force.

“Policing was sort of like a Plan B or Plan C for me,” he said. “I wanted to have a full career in the military. And that’s the direction I was heading.”

He explained that throughout high school, he was a good football player and one of his mentors suggested that he pursue it while he was young and asked if he had considered studying policing.

He took his mentor’s advice and applied for Haldimand Norfolk Police’s Auxiliary.

“The rest is history. I just fell in love with it,” Chief Davis said. “The structure was everything. It was the camaraderie, the structure of training,  we were a small service but it was an incredibly well trained police service.”

After working with the auxiliary, Chief Davis finished school during the hiring freeze in the 90s. During the same time, Indigenous policing was in its infancy including Six Nations Police.

“I had a few friends that were on the service that asked if I had considered joining them. I grew up on Six Nations and I wasn’t keen on policing my own community but at the same time it presented a really unique opportunity. Chief Glenn Lickers had been an RCMP officer before coming home to lead the service and he became one of my greatest mentors.”

Chief Davis said that there was a lot of stigma around Indigenous policing at the time and the service was having a hard time finding anyone with policing experience. Thanks to his time with the auxiliary, he was successful with his first application becoming the 12th member of the community’s force.

“My time with Six Nations was amazing. There were a lot of sad times as well, because I grew up in the community so you’re dealing with tragedy with people you know, or you’re related to or friends or, but overall, the positive things and the good times, outweighed everything.”

After spending 10 years with Six Nations, Chief Davis went north to the Nishnawbe-Aski Police Service in 2005.

“To be part of a service like Six Nations, where we were literally growing and expanding while trying to meet the vision of the community, along with the incredible pressure you feel from different layers of government to conform,” he said. “I learned a lot during that time and was able to apply those experiences throughout my career but most notably in Alberta. It has allowed me to bring a very unique lens that most people who’ve been acculturated through an organization with over 100 years of history will never appreciate or understand.”

Chief Davis said he has always approached roles with a willingness to try new things, with the knowledge that not everything would work, which he has carried into his position with BPS. He started by making Brantford the first police service in Ontario to switch to a note taking app, which has made officers’ jobs more efficient and reports more accurate.

“When I was hired, the board was very clear that they wanted to see some modernization. I knew there would be resistance along the way, but there are some serious crimes happening in Ontario and Brantford that need to be tackled in different ways.”

In addition to modernizing the force, Chief Davis said one of his other top priorities is diversifying the force.

“When you look at the dynamics of the city, it’s not the same city it was five years ago, 10 years ago,” he said.  “We need to really grasp that, understand that, and embrace that. As a police service, we really need to strive to reflect the community because of the language differences, cultural nuance, all those things. That will make us better going forward.”

In addition to diversifying the team in Brantford, Chief Davis also has plans for how they operate, hoping to move to a more stratified approach to keep Brantford safe.

“We have to run this like a business. I don’t need a 10 year veteran making over $100,000 a year to deal with disturbances downtown, I need them to be focused on the more serious crimes like guns, drugs, sexual assaults, and human trafficking. I need their skill sets and training focused on bigger things.”

The service has already begun to embrace the change, with the Tactical Intelligence Generated Enforcement and Response Unit (T.I.G.E.R.) making major drug busts since their creation just months ago.

The next step of his plan is the Downtown taskforce that will give younger officers an opportunity to gain experience working in Brantford’s downtown core. This project will resemble one he put together in Lethbridge called Community Peace Officers.

Chief Davis explained that these changes aren’t going to happen overnight, it is a process of trial and error. He said that it’s not about taking away jobs, but finding a spot for everyone at every level of the force.

“I’m very, very proud of where we’re at, especially considering all that has happened over the past few years,” Chief Davis said. “There is still a lot of work to be done in modernizing and diversifying this force, but I think we’re on the right track. Our next step is working on the plan for our new station; it will be key to bringing us into the 21st century. I’m excited for what’s to come.”