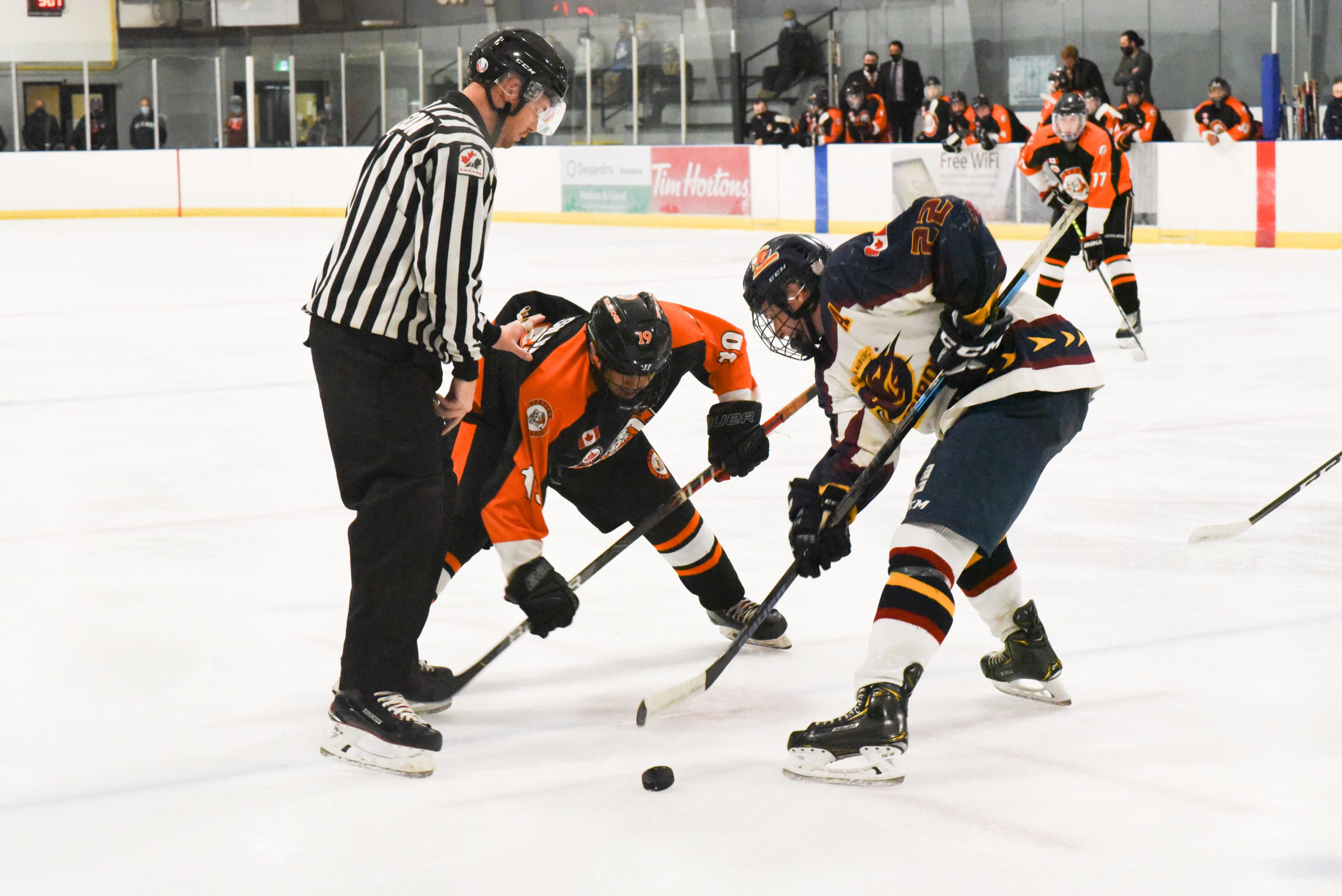 New Hamburg completed a third period comeback, scoring four unanswered goals, on their way to a 5-3 victory over the Burford Bulldogs on Saturday, October 9.

Caleb Ursu got the start between the pipes for the Bulldogs while Isaac Seltzer was in net for the Firebirds.

Burford came out quickly off the opening draw but the Firebirds didn’t take long to get into the game. After the Firebirds controlled the play in the offensive zone, Burford’s Isaiah Ilao was given a two-minute penalty for unsportsmanlike conduct at 2:57.

New Hamburg’s power-play units came out strong on the attack but couldn’t manage to get anything past Ursu or the Bulldogs defence. Less than two minutes after killing the penalty, Burford forward Derick Da Silva scored an unassisted goal to make it 1-0 Bulldogs.

The Firebirds bounced back quickly with a goal scored at 8:10 by Josh Vale, assisted by Zach Mark and Alexandr Potop.

The next four minutes were back and forth, with great scoring chances at both ends of the ice. The Bulldogs finally broke through at 12:17 with a goal by Thomas Morgan, assisted by Ryan Squires and Ethan Dezell. Burford was able to hold on to the lead to end the first despite strong offence by the Firebirds.

Down one starting the second, New Hamburg started the period with some great chances, but Burford’s defence looked strong blocking shot after shot. A tough bounce for the Firebirds led to an unassisted Bulldogs goal scored by Chase Machin at 2:50. Following the goal, New Hamburg continued to dominate offensively, but Ursu kept his team in the game.

A big hit behind the Bulldog’s net at 7:58 led to a two-minute minor and a 10-minute misconduct penalty to the  Firebirds Jake Thompson for head contact. Burford’s powerplay units come out slow but begin to click halfway through the penalty but couldn’t capitalize with the man advantage.

Just as time was about to expire in the second period, Burford’s Kyle Parsons was given a two-minute penalty for hooking. Bulldogs took a 3-1 lead into the second intermission.

The Firebirds came out flying with the man advantage to start the third period. Despite spending nearly the entire powerplay in Burford’s zone, New Hamburg was unable to net one. They didn’t let this get them down as they continued to drive the puck towards the net, dominating the Bulldogs.

At 4:53, Firebirds defenceman Matt Domm snuck one past Ursu, assisted by Thompson and Owen Bruder, bringing them within one, 3-2.

Burford struggled to get anything going offensively, leading to a Firebirds goal to tie the game up at three a minute and 30 seconds later. The tying goal was scored by Potop, assisted by Riley Benko.

Moments later, Burford’s Zachary Bird was called for a slash. After arguing with officials on his way to the penalty box, he was removed from the game. On top of his two-minute penalty for slashing, Bird was given a 10-minute misconduct for abuse of officials.

Burford managed to kill the penalty and had some great chances in front of the Firebirds’ net. Strong defence by New Hamburg led to another goal by Potop to take the lead with 7:36 to go in the third. The goal was assisted by Benko and Domm.

A minute later, the Firebirds head to the power play again with Burford’s Evan Saunders taking a hooking penalty. The Bulldogs held off New Hamburg to kill the penalty.

Ursu headed to the bench to give Burford the extra attacker with 1:30 left in the third. The Bulldogs’ coaching staff called a timeout with 1:15 to go, trying to find a way to send the game to overtime.

Burford got the puck on net a few times before a scramble at the blue line led to a turnover resulting in an unassisted, empty-net goal scored by Vale with under a minute left in the game.

Ursu returned to his crease to finish out the game, but Burford’s offence couldn’t put together a last-minute comeback.

The final score was 5-3. Shots were 36-15 in favour of the New Hamburg Firebirds.