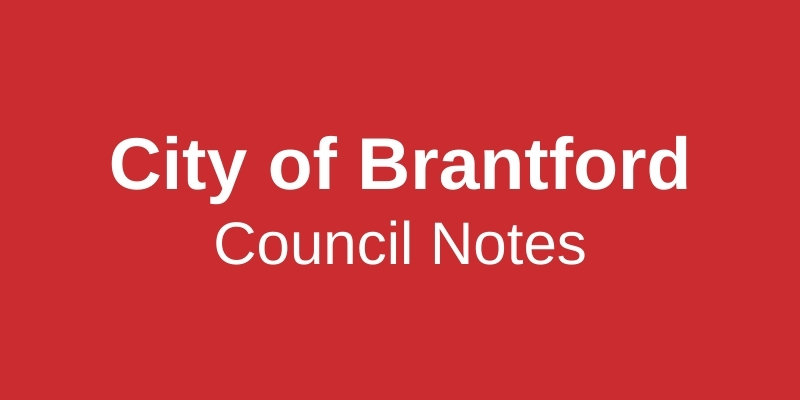 Council members proclaimed May 14th, 2022 as “Apraxia Awareness Day” in the City of Brantford. Childhood apraxia of speech is a challenging speech disorder that affects nearly 1 in 1,000 children. Children with apraxia will not learn to speak without frequent, intensive and appropriate speech therapy. Apraxia awareness day was created to increase public awareness about childhood apraxia of speech and to provide support for children and families affected by the disorder.

The City of Brantford declared May 1-7 as “Emergency Preparedness Week” in the community to encourage citizens to participate in activities to educate on emergency preparedness.

The goal of Emergency Preparedness Week is to raise community awareness and the need to prepare for the possibility of an emergency including the benefits of making an emergency plan and building a 72-hour emergency preparedness kit.

City of Brantford council members joined the County of Brant and Six Nations of the Grand River to recognize May as Community Living Month.

Community Living month is a time to reflect and acknowledge all of the people from across Ontario and celebrate the many successes of creating inclusive communities for people with developmental disabilities.

Employers, government, and workers in Canada, the United States, and Mexico will join forces throughout the week to promote greater awareness of the importance of preventing accidents and occupational workplace.

The goal of NAOSH Week activities and events is to provide stakeholders the opportunity to renew commitment, dedication, and investment in occupational safety and health as well as education and training programs in the prevention of accidents, injuries, and illnesses.

The City of Brantford proclaimed May 1 as the 150th anniversary of the W. Ross MacDonald School for the Blind and Deafblind.

The school, located at 350 Brant Avenue, opened its doors to students from across Canada on May 1, 1872.

Today, the school educates students aged 4-21 who are blind, have low vision or are deafblind from all across Ontario with individualized and unique learning experiences.

City of Brantford council members declared the month of May as Building Safety Month.

Building Safety Month is intended to remind the public about the critical role of communities’ largely unknown protectors of public safety––local code officials––who assure of safe, sustainable and affordable buildings that are essential to prosperity.

“Safety for All: Codes in Action,” the theme for Building Safety Month 2022, encourages communities to raise awareness about planning for safe and sustainable construction; career opportunities in building safety; understanding disaster mitigation, energy conservation; and creating a safe and abundant water supply.

Councillor Greg Martin moved the amendment, with Councillor Dan McCreary as a seconder, stating that these were two of the only schools in the city without adult crossing guards.

“This is something that was brought to our attention by parents and school board members in the area,” Councillor Martin said. “I think that it is important that we provide these schools with support, these are fairly busy streets.”

In addition to the crossing guards, the City will also put up signs and markings to implement a regulatory School Crossing in coordination with Brantford Police Services.

The city plans to honour the late Kevin Finney by naming a street in his name.

Council voted unanimously to add Finney to the list of approved street names, and to prioritize the name to use in an industrial subdivision in Brantford.

Many council members were visibly emotional discussing the matter on the floor.

“He was an amazing colleague, friend and father,” Councillor Jan VanderStelt said. “He was humble and kind.”

Finney and his wife Kelly have two young daughters, Emma and Bella. Members of council sent their regards to the family, stating that they hope this will be a reminder of all that Finney did for the community.

“It’s not that often we do this,” Councillor John Sless said. “In years to come, his children can look at this street and say, ‘That was my dad.’ He left us way, way too early, but he left a lot behind that he had achieved and I think that that speaks volumes.”

“Kevin was one of the best of the best,” Councillor Cheryl Antoski said. “He did really good work on behalf of the corporation. It’s fitting that we honour him in a way that would have been important to him.”

“The corporation of the City of Brantford lost a great friend, colleague, an outstanding leader, who worked tirelessly to promote the city both locally and internationally,” the resolution read.

City of Brantford council members defeated a motion to dissolve the Ontario Land Tribune during the meeting on Tuesday, April 26.

The motion stated that the City of Brantford requested that the Government of Ontario dissolve the OLT, with belief that doing so would eliminate one of the most significant sources of red tape delaying the development of more attainable housing in Ontario.

“The problem that I have with this is that it does not provide an alternative,” Councillor Martin said. “I do think something is needed for this area, but I don’t believe in abolishing it until something is designed to take its place.”

“Is the system perfect, no,” Councillor Wall said. “I am voting against this because I don’t know what the alternative is.”

The motion was defeated with a vote of four in favour and six opposed.

City of Brantford council and committee meetings will continue to be held in a hybrid format, with the option of in-person or virtual attendance.

“The launch of virtual and hybrid meetings has allowed the City to record and make available meetings of all committee types” the report read. “Currently, the City has been live broadcasting City Council, Committees of the Whole and Standing Committees directly to YouTube. Meetings of Advisory Committees and Task Forces are recorded and uploaded to YouTube after completion.”

All meetings, aside from the Brantford Airport Board and any Special City Council closed meetings, will be open to the public and available to stream live on YouTube.

A survey regarding meeting preferences was provided to current advisory committee and task force members. A total of 30 responses were received from the distribution of approximately 100 external members. Individuals were asked to provide feedback on personal preference and overall preference for meeting formats and whether or not they wanted to continue recording meeting.

Overall, 50 percent voted to keep the option of virtual or in person meetings. Sixty-seven percent of respondents voted to continue recording all meetings, with 10 percent against and 23 percent stating they had no preference.

Council members voted unanimously to continue with the hybrid meeting format. The decision has no financial implications.