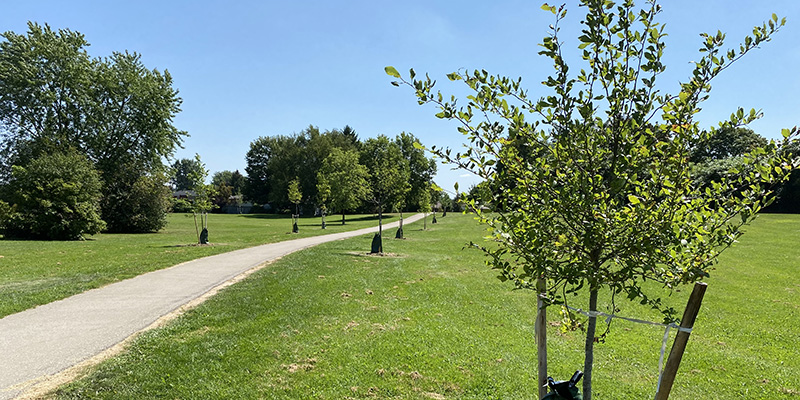 City of Brantford announced an increase to their tree canopy coverage across the city in an effort to combat climate change.

The increase is a result of a new tree planting program implemented this year. Brantford’s 2021 tree planting program began in the spring with a free tree giveaway to residents. Six different species of trees were distributed to registered participants during the last weekend of May and 200 trees found new homes in Brantford yards.

Due to the response of the program, City staff plan to implement the program again next year as part of the City’s Earth Day events, which is on April 22, 2022.

Additionally, 78 trees, roughly 10 feet tall, have been planted in City parks around the community. This is in addition to the regular City park and boulevard planting of 400 to 500 trees that the City’s Parks team plants annually.

Twenty trees were planted thanks to the generous donation from John Monné, who in 2019, donated $10,000 to plant trees in the community to reduce the impacts of climate change. Mr. Monné’s trees have been planted throughout Bridle Path Park and along the walking path to create a shady walking route for local residents and students at Branlyn Public School.

More trees will be planted on commercial and industrial properties thanks to funding from the Commercial and Industrial tree-planting grant program, which supports the City’s efforts to increase tree coverage on both private and public property. Finally, the City is planting 5,000 new trees on publicly owned land adjacent to the landfill.

Adding to the City’s tree canopy inventory is not only beneficial to the environment, but also offers a multitude of benefits to the community such as increased shade, improved air quality, increased stormwater storage, increased biodiversity and habitat, and of course beautifying parks and neighbourhoods.