A kooky evening with The Addams Family 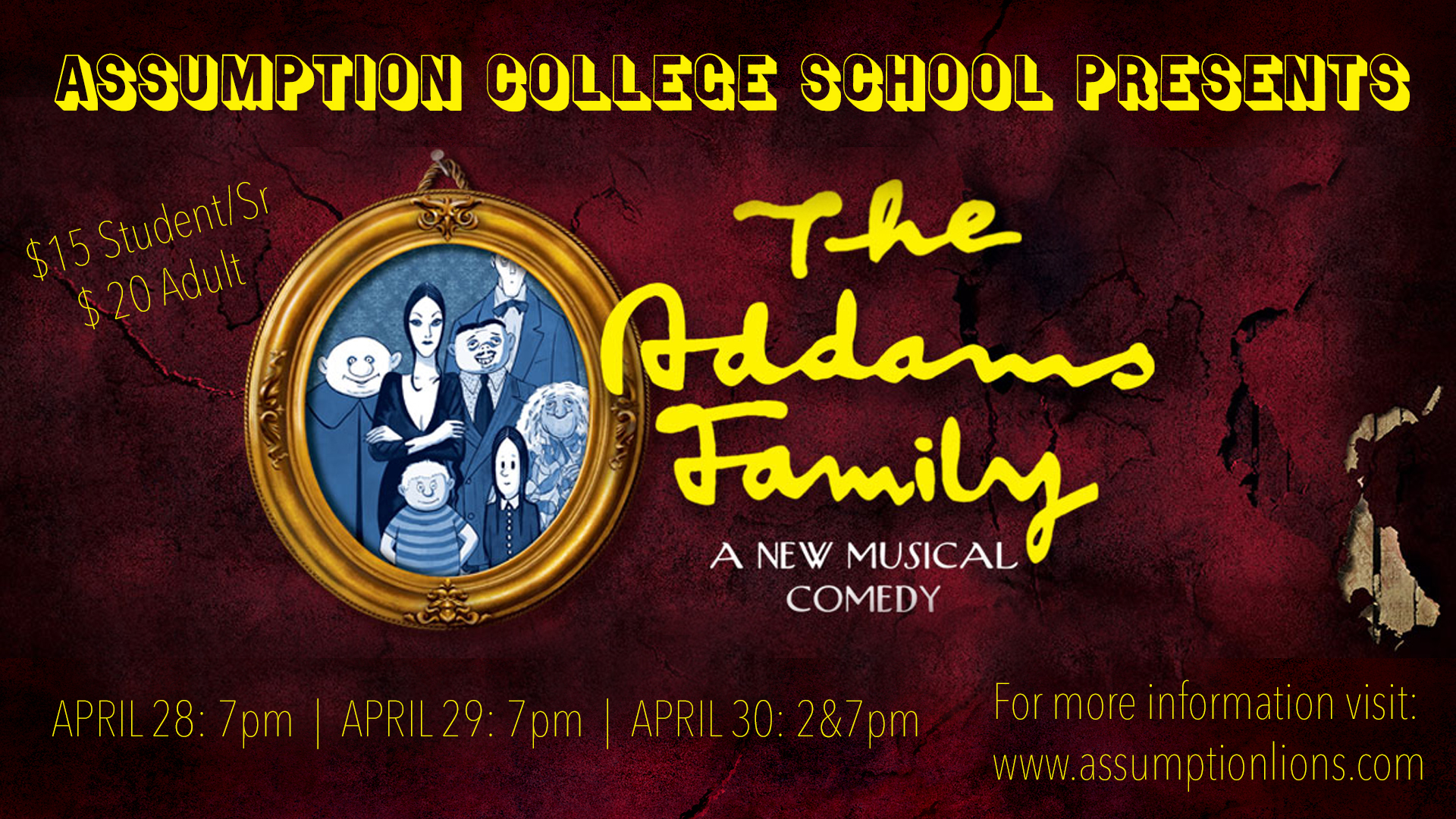 Assumption College School is preparing to raise the curtain for the first time in nearly three years with their upcoming production of The Addams Family.

The new comedy musical includes roughly 60 students, with a cast of 35, a crew of 12 and a team of around 15 hair, makeup and costume designers. This show also includes the largest staff involvement with 20 teachers working alongside the students.

Danielle Boschman, who is a teacher at ACS and the choreographer of the musical, said that the opportunity for a large cast was important in selecting the show.

“We try to choose musicals that have a large cast with multiple leads and supporting roles,” she said. “We want to be able to showcase as many students and their talents, especially after not being able to put on a show the past few years. Even our chorus has a huge role, being on stage for a large portion of the show.”

With the ongoing pandemic, Boschman said that the positive impact that the arts have has been missing from the school and community.

“Oftentimes the arts get overlooked and pushed onto the backburner, but they are so valuable and we have seen the effects already on these students through the musical,” she said. “For the first time in years, these kids are learning to work together as a community, learning to collaborate and problem solve.”

ACS is the only school in the district that took on a musical this year, and Naomi Ratelband, director of the show, said that it has not come without its challenges.

“Putting on a show in normal conditions is difficult, but the added stress of the COVID-19 pandemic has been extremely nerve-wracking,” she said. “Up until recently, we had been running rehearsals with masks, people were hyperventilating, trying to sing and dance. It was not ideal. People were going off from being sick with COVID and we had to imagine that their spaces were filled.”

In addition to the ever changing restrictions, the production lost an entire month of rehearsals after Christmas break with the lockdown and pause to extracurricular activities.

Despite the added difficulties brought on, Ratelband said that it was very important to get students back on stage.

“There was definitely a big learning curve this year, and we really saw it from the early stages in auditions,” she said. “Over the last few years, confidence has plummeted in these students. So many of them came in lacking a sense of self, and that’s what high school and the arts are supposed to help these kids find. It has been so rewarding, inspiring really, to see these kids work so hard. They have come such a long way since those auditions.”

Boschman said that the return of extracurricular activities, like the musical, has completely changed the energy around the school.

“We are starting to see life back in the hallways again,” she said. “Up until recently, there was a really eerie feeling around the school. Having the musical and other activities coming back, spirits are starting to lift and you can really feel the sense of joy again.”

Ratelband said that the theme of acceptance in the show has been a great lesson for the students and hopes that the audience will not only laugh and enjoy the show, but also learn the importance of accepting people for who they are.

Tickets for ACS’s production of The Addams Family are now available to the public.

Students will take the stage at the high school in four shows, 7 p.m. on April 28 and 29, and 2 p.m. and 7 p.m. on April 30.Tickets cost $20 for adults and $15 for students and seniors and can be purchased at https://assumptionlions.ticketleap.com/musical/